Are you someone who has made a lifestyle change for the better? Are you committed to fitness and overall wellness? Have you lost a tremendous amount of weight and want to shout it from the mountain tops? Or do you need some accountability in helping you stay on track and want to write about your new health journey?

Lean Girls Club wants you to be featured in THIS LEAN GIRL ROCKS segment. I haven’t done those in a while and I know there are lots of people out there who are inspirational and I want to celebrate your success!

3. Submit a writing sample sharing what you’d like to write about and why. Want to share your before and after photos? Great! Brag about how cooking at home helped you lower your cholesterol? Ok! Be creative. Be inspirational. Be You.

4. Subscribe to LeanGirlsClub either through WP or submit your email address on the upper right hand corner –> 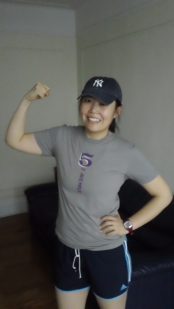 Today’s guest blog post is from Lisa at Early Morning Run. I asked her to share her inspiring story while I spend a few days wedding dress shopping with our Lean Girl & Bride Kara. While I’d run on the … END_OF_DOCUMENT_TOKEN_TO_BE_REPLACED

This week was Fall TV Time! Or whatever it is it’s called. TV premiere week. Or the start of the new TV season, I guess.

You can tell I don’t watch that much TV. I don’t even have cable — just Season Two of Mad Men on DVD and a fondness for Saturday morning cooking shows on PBS.

But I did tune in for one premiere: New Girl, 9/8 Central Tuesdays on FOX.

It was a little awkward, as most pilots are, but it had some good lines about “reverse Mormons” (I’d be lying if I said I hadn’t used that one before… don’t ask why…) and a “stripper with a heart of gold.” That last one hit me funny because I’m pretty sure one of my former roommates owns the domain name hookerwithaheartofgold.com. Or she did at one point, at least. I’m also pretty sure another of my former roommates is actually Zooey Deschanel’s character, Jess. Which, considering the premise of the show is Jess moving in to an apartment full of men, might actually make me a man.

While we’re on the subject, how do I love thee, Zooey Deschanel? Let me count the ways…

Um, yeah. Can she join the club? Because I think it’s pretty clear this “New Girl” rocks!

Question: If you had a theme song, what would it be? (Deschanel said hers would be “Friends of Mine” by The Zombies. And, of course, Jess from “New Girl” has her own, “Hey Girl,” sung by guess who?)

I’m nine months away from embarking on the greatest challenge of my life: marriage. But an almost equaling daunting task awaits me in those months leading up to it: preparing for a wedding.   Now, I should tell you, I’m … END_OF_DOCUMENT_TOKEN_TO_BE_REPLACED

We haven’t featured a Lean Girl in a while so I’m pleased to introduce Liz. Liz is the LGC Giveaway winner of the free training session with my trainer Justin of Rich Barretta Private Training. Since her first session a few … END_OF_DOCUMENT_TOKEN_TO_BE_REPLACED

Lisa at Early Morning Run presented me the Stylish Blogger Award. And as my acceptance speech I’m to list seven random facts about me. I’m going to TRY to make this about diet, fitness, and health but forgive me if it’s … END_OF_DOCUMENT_TOKEN_TO_BE_REPLACED

British songstress and two-time Grammy winner Adele held a private showcase last night at the PC Richard & Son theatre and I was one of the lucky few to be invited. She is absolutely amazing. Not only does her voice … END_OF_DOCUMENT_TOKEN_TO_BE_REPLACED

Meet Lean Girl Jen Porto. Originally from California, Jen grew up as an active kid playing every sport you can imagine: volleyball, basketball, softball, and soccer. “I did every sport and tried it at least once. I was always a … END_OF_DOCUMENT_TOKEN_TO_BE_REPLACED

Thanks for being patient while we undergo maintenance and a mini-makeover.