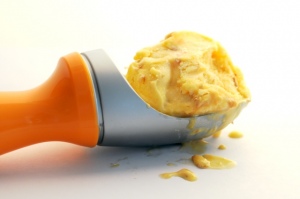 Sample this week’s sinless scoop — the latest news in health, fitness and food. No peanut butter news this week.

My home state just was ranked the 23rd most obese in the U.S., according to a study by the Trust for America’s Health and the Robert Wood Johnson Foundation. We’re one of 16 states who increased their obesity rates this year. But don’t look so smug, everybody else. Nobody’s obesity rates decreased, and all were completely unheard of as recently as 1995.

Eat Any Other Foods You Want!

Ah, those were the days! When butter was its own food group!

Before My Plate, there was the Food Pyramid. And before the Food Pyramid, the U.S. Department of Agriculture’s nutritional guidelines came to us via The Basic 7. Coco at Running with Perseverance dug up this U.S. government chart from 1943, encouraging Americans to eat some food from each of seven groups (including the butter and margarine group) every day and, in addition, “eat any other foods you want!”

Sadly, with all the greasy fast food and portion sizes now nobody could have dreamed of then, you can’t really party like it’s 1943 anymore.

One look at this list of beers ranging from 55 to 159 calories probably will convince you to just reach for the water. That’s pretty much what Natty Light, et. al, taste like. But there are one or two surprises: Blue Moon Summer Honey Wheat is one of my favorites, and who can resist a Bud Light with Lime, no matter how plebian?

Red Wine: Exercise In A Bottle?

Not much of a beer drinker? Here’s even better news about red wine: Resveratrol, found in the drink, may prevent the negative effects of a sedentary lifestyle. This is supposed to be good news for astronauts, who spend long periods weightless in space, although it’s a little late for that now. So we all just can take it as a good excuse to imbibe a bit on those days we can’t make it to the gym.

Can She Join The Club?

It’s always inspiring to read about a Lean Girl who rocks. But perhaps never more so than when you know that girl is going through all the exact stresses and challenges and obstacles to a healthy lifestyle you are… and still rocking it. So you can imagine how inspired I was to read this Q&A with another journalist and newlywed. May I present my new hero: Jenna Lee of FOX News.

Question: Who inspires you to live lean?

Read more: My HealthySELF: How FOX Anchor (and Newlywed!) Jenna Lee Juggles It All, Plus Her Fitness Secret!

Thanks for being patient while we undergo maintenance and a mini-makeover.